A construction vehicle tears down the old library/Brock Weir

The library, which had stood for over 100 years and had been closed since 2015 was torn apart by demolition crews.

The old library holds a lot of memories for people as it was Aurora’s first purpose-built library.

It held many different events and activities such as a battle of the bands competition on fridays, an annual teen art show and a visit by author George Korman.

As the town makes this transition, some people are divided on how they feel about history coming down. 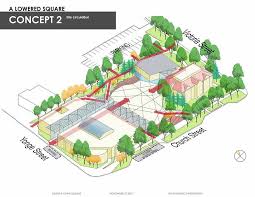 Overhead drawing of Concept 2, the plan chosen by council/Facebook

Corrie Clark, a newer resident in Aurora who lives in the “east side” explains why there is a divide between the older members and the newer, younger members over what happens to Library Square.

“People don’t like change. There’s a big half portion of Aurora that doesn’t like change at all sort of an older portion. I live with all newer people and new immigrants to Canada and talking with them they feel it’s time for a change down there.”

The plan to renovate Library Square has been talked about for years but never got further than just talks.

“Aurora’s a funny town. It took 20 years for this whole concept to get implemented.”

Now that a concrete proposal has been submitted and approved by the town council, it has locals wondering about what else could be changed in the small town.

While there may be a divide between the older and younger population over history coming down, some of the “original” locals in Aurora do not see a problem.

Bob Mcroberts, an Aurora resident for all his life and an honorary member of the Aurora Heritage Council, feels that there is no need to get upset over the old library getting demolished.

While this demolition also means change, Bob says that Aurora still has a small town feel.

“I can still walk down the street and say hello to someone I know.”

More detailed plans have been sent to council, while a start date for construction is in all likelihood in 2019.