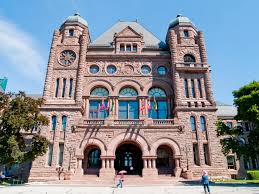 “Why does this premier think that Ontario workers should choose between getting paid and getting well?”

That was one of the top questions asked by NDP leader Andrea Horwath during today’s question period at the Ontario Legislature.

This issue arose over the proposed Making Ontario Open for Business Act that was introduced on Oct 23.

That bill would make changes to the Employment Standards Act of 2000 and the Fair Workplaces, Better Jobs Act of 2017.

The Minister of Labour, Laurie Scott, was driving home the point that this bill is good business for the government and for workers.

Horwath was there to point out how she feels these changes will not help Ontarians.

“It seems to me that the Minister of Labour Is more interested in helping the bad businesses.”

Throughout the entirety of Question Period the speaker, Ted Arnott, had to maintain control in the chamber.

Many MPP’s interrupted and shouted at each other with the speaker giving out multiple warnings and reminders about edict in the house.

“I will remind members that there are a lot of people watching this question period and they’re developing opinions about whether or not we are debating these manners in a respectful way. Our constituents are watching.”

Another topic brought up was over food insecurity in the province.

According to the Daily Bread Food Bank, food bank use has increased by 14% since 2008 and that almost a million Torontonians needed to use a food bank over the course of a year.

The Minister for Children, Community and Social Services Lisa MacLeod, deemed it “very serious” and explained the government’s plan also stating that one in seven people live in poverty in Ontario.

“We’re taking immediate steps through the Minister of Economic Development and Trade in ensuring that we have we have an Open for Ontario Business Act so we can get more jobs in the province of Ontario.”

As Question Period continued, the topic changed to government spending.

The MPP for Essex Taras Natyshak, who was warned previously in Question Period for his edict, fired questions directed towards Premier Ford asking about how much money the PC’s are spending on vanity signs.

The PC government has plans to change all of the vanity signs that welcome visitors to Ontario with the slogan “Open for Business”.

“It’s pretty shocking the premier can’t give us a simple answer to a simple question. What’s next speaker? Is he going to tell us don’t worry Mexico gonna pay for these signs?…perhaps the premier doesn’t care cause its not his money.”

That prompted a fiery response from the Premier.

The Progressive Conservatives had repeatedly talked about Ontario being “Open for Business”, and that was no different at Question Period.

From Minister Scott to Premier Doug Ford, they all used that same phrase that has become synonymous with the Progressive Conservative Party in Ontario.

The “Open for Business” is the trademark for the PC’s and is their go-to response in any question at Question Period.

That quote, the PC’s believe, will help guide the province into a stronger and better future for Ontarians.