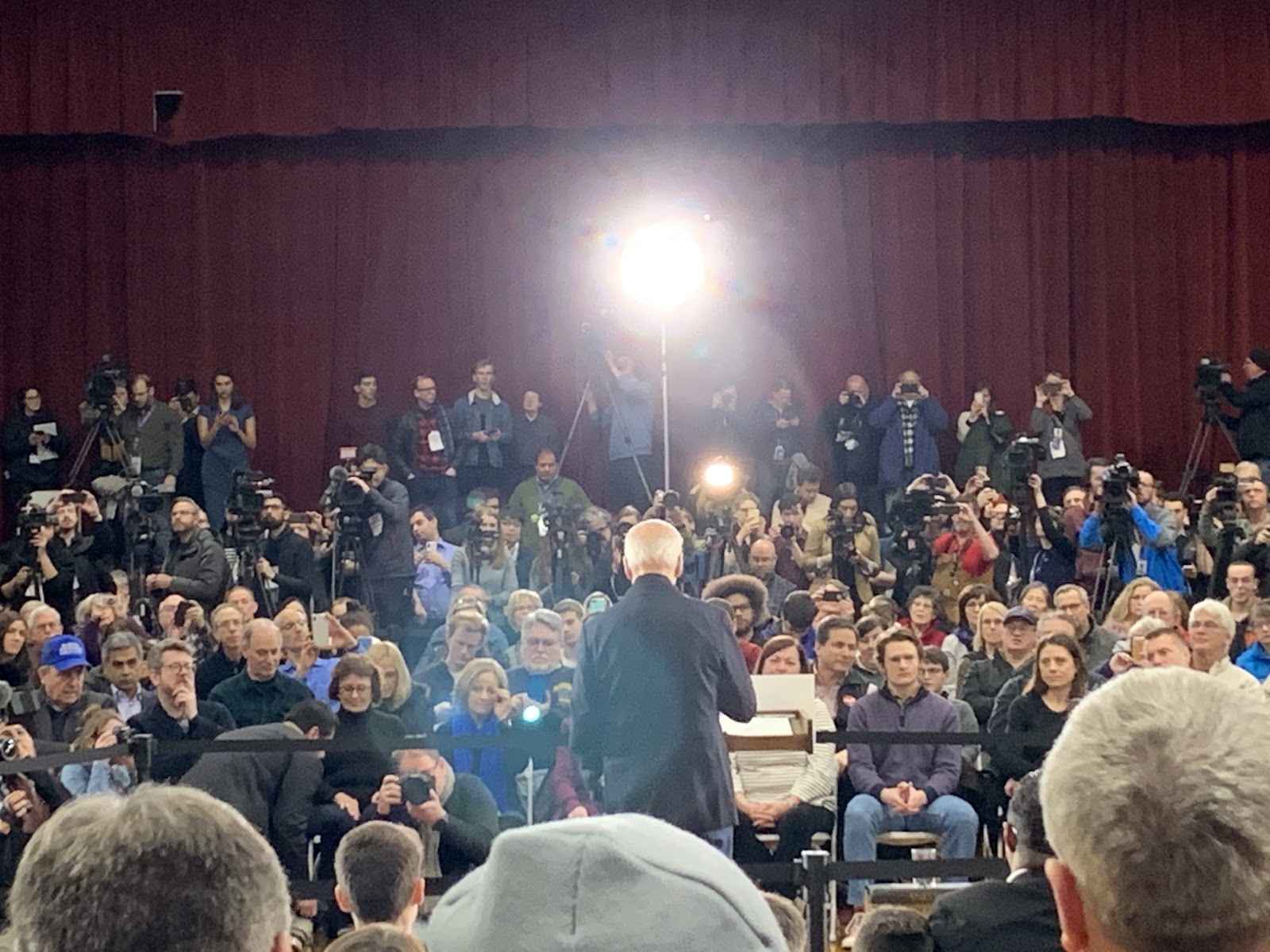 Joe Biden held a rally on Sunday, Feb 9, in the quaint town of Hudson, New Hampshire two days before voting in the New Hampshire primary. New Hampshire is a state full of small towns loosely connected with winding gravel roads that travel through forests with little to no electrical light. While there are many signs on the interstate, there are no significant signs on the side streets that guide you to Hudson. It was like none of the other rallies in the state. Outside the Alvirne High School, Media vans lined up, and the parking lot was full.

You enter the small school through a reinforced glass door that creaked as it opened. The hallways were narrow and worn down from years of use. The paint on the walls was peeling, and the floor tile looked tired. In the gym, ragged banners hung on the walls for the sports champions of yesteryear. Rusted metal chairs surrounded a wooden podium labelled “BIDEN NEW HAMPSHIRE”. Supporters sauntered in and took their seats, then the waiting began. Biden was always late to his events. The event was scheduled to start at 3:45, but it was already four, and there was no sign of him. It was unclear if it was by design or if the Biden campaign was just poorly organized. His supporters had no idea that he was going to be late. As the delay grew longer, the crowd began to grumble louder—there was no update on when he might arrive or if he was coming at all.

When Biden finally walked in, the crowd of just over 150 people pushed back their chairs and cheered enthusiastically. Despite the boisterous reception, Biden kept a low key attitude. He frequently stepped away from his teleprompter and sought to engage audience members directly. He took many questions and was often giving his mic to other people despite having a deadline to get to another event. For all his efforts, though, Biden did not connect with his audience. People put on their coats, got up and left early. Even his volunteers urged him to finish up, scrambling around trying to get Biden to stop. They repeated, “Last question” to each new question asked of Biden, but he just kept ploughing through all of them. The more he talked, the more he looked like a doddering old man stumbling over his sentences and speaking in a language of someone who is stuck in the ’70s. He uttered phrases such as “A lying, dog-faced pony solder” when talking about President Trump. Biden looked like he was out of his depth, no longer relevant in 2020.

Before the New Hampshire Primary, Joe Biden was known as the V.P in the Obama administration. He often sported black shades and carried himself with the utmost confidence. He was a career Democratic politician born and raised in Scranton, Pennsylvania, in the heart of middle America. He framed himself as a champion of the middle class but had difficulty connecting to this demographic in the early going of his campaign. In the Iowa Caucus, he inspired little confidence and was handily beaten by the other candidates. As they soared in the polls, Biden slipped well below expectations, finishing a disappointing fourth. The party was looking for newer thinking and fresher faces. Biden was neither.

He was a down to earth U.S senator from Delaware. He had always been involved in politics but not as a primary player. Biden has run for the Democratic nomination before, twice in fact, but he never gained any traction. He lost in 1988 to Micheal Dukakis and in 2008 to Obama. The 2020 campaign is his last opportunity to take the position that he has aspired to for so long, the most powerful in the world, the President of the United States of America. After Iowa though, even his most fervent supporters started to lose hope in his campaign.

There seemed to be nothing that he could do to curtail the downward spiral of his campaign. The lane of “moderate democrat” was densely crowded. The younger, fresh-faced, Obama clone Pete Buttigieg took the place that was seemingly reserved for Biden. He burst on the scene quickly and rose through the polls astronomically. His message of hope resonated with moderate Democrats just as it did when Obama ran in 2008. Even Minnesota Senator Amy Klobuchar attracted voters looking for a moderate candidate with more experience than “Mayor Pete”. The widening Democratic field seemed to leave Biden behind. After Iowa, many pundits were expecting him to drop out. His performance in New Hampshire made it seem inevitable.

Even before the results were announced, Biden had left New Hampshire.

Despite his dismal performance, Biden maintained a strong backing from longtime supporters.

“Biden, I think he is centred, experienced and brings back honesty to the White House which has been lacking”, said Charles Oppman, a New Hampshire man, Vietnam veteran and typical Biden supporter: Older people who look to the future by taking the best of the past.

On Super Tuesday after New Hampshire, everything changed. Biden surged up the polls in an unprecedented turnaround. Suddenly he was the frontrunner, all the while, staying true to his folksy manner. Outside of Iowa and New Hampshire, he connected to voters like never before, propelling his democratic nomination aspirations.

CNN commentator and former Obama advisor who had worked with Biden, Van Jones added he had not seen anything like this before.

“We have seen Joe Biden go from being a joke to a juggernaut.”

What changed after New Hampshire? What made Biden suddenly so appealing?

There is no doubt that Biden has an impressive resume in public service. At an early age, he was elected to the New Castle County Council. From there he became a U.S senator for the state of Delaware. At the time, at 29 years of age, he was one of the youngest people ever to be elected to the United States Senate. He worked his way up the chain to become Chairman or Ranking Member of the Senate Judiciary Committee for 16 years. He also served as Chairman for the Foreign Relations Committee where he was involved in many tense negotiations which included the Gulf War, Bosnian War, Iraq War and Kosovo War. He had been in a political setting for so long that he had connections from members young and old, retired and deceased.

His ardent supporters believe that Biden is strong on experience and electability, qualities that they think are needed to defeat President Trump in a general election.

Peter Cymor attended the Alvirne High School in Hudson. He sported a New England Patriots shirt and could recite how he felt about Biden as if he was reading off a teleprompter. “I am supporting Vice President Joe Biden to be the nominee for President of the United States…Given that I was unhappy with the current President Donald Trump…I said this is a candidate that I can get behind as I was happy with the eight years he was Vice President behind Barack Obama.”

Despite a strong base of support after the first primaries, Biden found himself trailing his closest political rival Bernie Sanders who was calling for a political revolution. The surge of support that Sanders got after New Hampshire, and his subsequent win in Nevada, caused many people within the Democratic establishment to take him as a serious contender.

Talk of revolution though ruffled Biden’s feathers. He is a man of consistency. He is a man that talks about incremental change. He is a man that loves to gloat about all the labour he did to pass through bills such as the Affordable Care Act. Sanders’ growing popularity was a wake-up call for Biden. He redoubled his efforts and brought much-needed excitement and energy to his campaign.

A couple of days before the South Carolina Primary, Biden held a town hall on CNN. He was interacting with the audience when a pastor asked him a question about gun control. The pastor was very emotional as the question conjured up his feelings from losing his wife in the Charleston massacre. Biden went over to the pastor and consoled him. At that moment, Biden moved away from a typical political candidate. He became a shoulder to cry on for someone in need. He showed his humanity. He showed compassion, heart and faith, something that can be lost during a political campaign all too quickly.

Later in the day, influential South Carolina political representative James Clyburn gave Biden his endorsement. This was a crucial endorsement as Rep Clyburn has deep ties with the African American community in South Carolina. It turned Biden’s campaign around.

The thumping win he obtained in South Carolina gave Biden the aura of a winner, and someone voters can trust in a head to head matchup with Trump. He shed the doddering old fool image and presented himself as straightforward and genuine.

“This is the moment to choose the path forward for our party. This is the moment, and it’s arrived…but it’s here and the decisions Democrats make all across America the next few days will determine what this party stands for, what we believe and what will get done.” Biden said in his South Carolina victory speech.

Facing their resounding defeat, most of his political rivals dropped out and immediately endorsed Biden. The lane of moderate democrat was now his alone.

As America moves closer towards the election, it is clear that Democrats will look to Biden to defeat Trump. That does not mean that Biden is without his faults. He ranks very low amongst Latinos and younger demographics according to national polling. For some of the younger voters, he embodies the politics of the past: someone who cannot adapt to the changing environmental and economic problems of today. Others see him as a stabilizing presence, someone who will bring back decency to a position that may be lost. For better or worse, this is whom the Democrats have chosen as the best chance of beating Trump. Time will tell if he can handle the responsibility and claim the title of President of the United States.