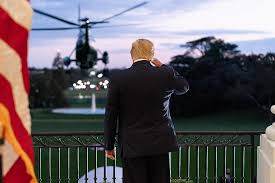 “I’m going to Walter Reed hospital. I think I’m doing very well but we are going to make sure that things work out.”

That is what the U.S. President Donald Trump said in a video published to Twitter on October 3, shortly before going to get treatment for his recent positive COVID-19 diagnosis.

Many pundits on TV and social media were saying that this diagnosis is the continued downward spiral of a president on his way out of the White House in a landslide election in November.

However, his diagnosis can be portrayed as something positive that can potentially help him get reelected.

I know it sounds a bit crazy but bear with me for a bit and let me explain.

Let’s start at his current position in this race.

According to FiveThirtyEight, as of October 18, President Trump’s handling of COVID-19 has garnered him a 57.4% disapproval rating with only 39.8% approving of his work so far. Safe to say that most people feel that he is not doing a good job right now.

The U.S. is in the middle of an economic downturn. Many Americans have unfortunately lost their jobs, lost their homes and have lost their lives.

President Trump has an opportunity to do something that many of his critics have said that he never has and will never do. Relate with “everyday americans.”

Since he first went down the escalator and announced his campaign back in 2015, the Trump team has been attacked with messages of being high class and out of touch with what Americans are feeling. Mainly considered a sideshow and someone who is not a realistic candidate.

When Trump began campaigning, he was able to go to the “rust belt” (Pennsylvania, Michigan, Wisconsin and Minnesota) and talk to residents there about the issues that they were facing. Those issues primarily were jobs, trade deals and manufacturing. By hitting on those issues, he was able to flip those states that had been solidly in the democratic base for many years, and the end result came as a complete shock.

Moving forward to the 2020 election and Trump is now struggling in most head to head polling with his democratic opponent former V.P Joe Biden. In an average of polls on RealClearPolitics, Biden is leading Trump by almost nine per cent as of October 18. Biden has been able to connect with the voters that Trump had in the previous election.

There was also a change in what issues mattered the most to Americans. Former bedrock issues of previous election cycles such as the economy, foreign policy and immigration are not seen as a priority this year. Looking at the most recent Gallup poll about the top issues in America, the three issues that voters care about are COVID-19 (25%), Poor Government Leadership (25%) and Race relations (13%). The issues that Trump addressed the previous election are not priorities that voters feel are as important.

So for Trump to close the gap that he has, he must address these issues that Americans are prioritizing. By sharing his experience with COVID, he can relate more with the over 8 million people who have had COVID in America.

He can appear more sympathetic towards those who have suffered by addressing their issues. Creating and distributing widespread testing. Creating stimulus packages to be delivered as soon as possible to all Americans. Getting a vaccine delivered to all Americans when ready and approved by top medical officials in the country.

Those are the issues that Americans want addressed and hope that the president of the United States in 2021 will be able to fix.

Trump needs to move away from the rhetoric of his 2016 campaign and adapt to the climate that America is currently in if he has any chance of winning reelection.

While many believe that Trump has no chance to win again, by changing his style to fit the current top button issues in America, he has more of a chance of winning than people think. If he does that, you should not be surprised if you see Trump getting sworn in for a second term in the new year.